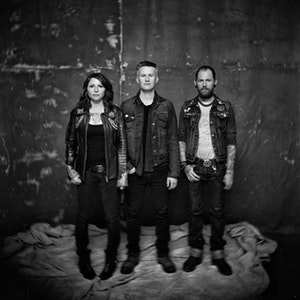 There’s a road that goes out of every town. All you’ve got to do is get on it,” Pete Bernhard says.

The guitarist/singer and his cohorts in the raw and raucous trio The Devil Makes Three have found their way onto that road numerous times since they first left their picaresque rural hometown of Brattleboro, Vermont. Back then, they had no idea it would lead them to such auspicious destinations as the Newport Folk and Austin City Limits Festivals, Bonnaroo and Lollapalooza, and on tours with Willie Nelson, Emmylou Harris and Rodney Crowell and Trampled By Turtles. Along the way, they drew numerous accolades from a growing fan base and press alike.

With upright bassist Lucia Turino and guitarist Cooper McBean, Bernhard crafted a dozen tunes, part road songs, part heartbreak songs and part barnburners. While most bands are propelled from behind by a drummer, TDM3 builds exuberant rhythms from the inside out, wrapping finger-picked strings and upsurging harmonies around chugging acoustic guitar and bass, plying an ever-growing audience onto its feet to jump, shake and waltz.

The combination could only have happened via the circuitous route each of them took to forming the band. As kids in Vermont, “all raised by sort of hippie parents” who exposed them to folk, blues and jugbands, Bernhard says, they blazed a path to nearby Boston, Massachusetts in search of punk rock shows. They found venerable venues like The Rat and The Middle East, drawn to east coast bands like the Dropkick Murphys and Aus-Rotten.

“It would be like 6 bucks for 13 bands, everyone playing for 20 minutes,” Bernhard says. “I had so much fun going to shows like that. The energy coming off the stage makes a circle with the crowd and comes back. We were really attracted to that energy.”

Bernhard and McBean, a multi-instrumentalist who plays banjo, musical saw and bass, forged a particular bond. Unlike most of their mutual friends, they both liked to play acoustic music, with McBean showing Bernhard the wonders of Hank Williams and Bob Wills & the Texas Playboys. They kept in touch after high school, when nearly everyone in their clique relocated to the west coast like the characters in Delbert McClinton’s song “Two More Bottles of Wine.”

“It was a mass exodus of kids who went out to start bands and be creative, searching for the unknown, dreaming of something different,” Bernhard says. “We wanted to get away from where we were from, as many kids do, and California was the farthest we could get.” Eventually they landed in sunny Santa Cruz, California, where TDM3 took shape in 2001. Their early gigs were house concerts, then small bars, punk shows, bigger rock clubs and theaters and festivals, all the while defying genre and delighting whomever turned up to listen.

Turino learned bass to join the band, but her unremitting sense of rhythm comes naturally from being raised by parents who were dance teachers, and from her own dance background. Attacking the strings of her upright, she understands how to infuse songs with the force it takes to get a crowd moving.

And the songs on I’m a Stranger Here tell the rest of the story, with the music often joyously juxtaposed against lyric darkness…the rootless nature of being in a touring band, traveling from town to town with little sense of community, represented by a devil-like character (“Stranger”)…thorny transitions into adulthood…struggling with relationships (“Worse or Better”), watching friends succumb to addiction (“Mr. Midnight”), coming to terms with mortality (“Dead Body Moving”), nostalgic notions of childhood (“Spinning Like a Top”). Bernhard even considers the destruction of changing weather patterns, inspired in part by Hurricane Katrina as well as a flood that wreaked havoc in Brattleboro (“Forty Days,” a gospel rave-up recorded with the Preservation Hall Jazz Band).

Bernhard wrote more than 20 songs for the album and turned them over to producer Buddy Miller, who gravitated toward the darker material but insured that the recording was lit up by the band’s innate ebullience. It was Miller’s idea to record at Easy Eye rather than his renowned home studio. “Easy Eye is like Sun Records,” Bernhard says. “There’s one live tracking room filled with amazing gear, and that defines the kind of record you’re going to make. That was exactly the record we wanted to make, and we knew Buddy was the one who could capture us playing together like we do.”

For a band that made its bones with dynamic performances, recording an album is almost like coaxing lightning into a bottle, but Miller and TDM3 succeed on I’m a Stranger Here. Now they’re continuing the journey that began when they found their way to the road that led them out of Vermont. “I can’t wait to get onstage, I love it,” Bernhard says. “Playing music for a living is a blessing and a curse, but for us there’s no other option.”